Weeeeeeell… The idea of travelling on a motorbike is an old one for me. I have always loved bikes, and riding on them as soon as I get my licence. The first bikes I rode was a Derbi Senda SM, when I get my driving licence at 18 I rode my father’s, the first bike I bought myself was a BMW K1100LT. Not the prettiest bike, but I still love her, even if her gearbox and rear axle need to be changed.

During spring 2008 I begin to think about going to Morocco on a bike. Sebastien’s parents (Sebastien is one of my closest friends) used to live in Rabat, so we were planning to ride from Paris to Morocco then stay a while at his parents’ then ride back.

At the same time I found in the ads on internet (looking for bikes is one of my main hobbies^^) a first hand BMW R80G/S. We went to Le Havre with Laure to see her and rode her back to Paris.

What a lovely bike, isn’t it?

Finally I was unable to have enough holidays during summer 2008 for such a trip… so Laure and I went sailing a week in Britain. Buuuuuut… some months later, the idea of travelling to Morocco came back. Not with Sebastien (sorry, Seb…) but with Laure.

Laure’s mother was worried about us to travel on a 30 year old motorbike, so I took the opportunity (well, I also grabbed a bargain) to buy a BMW R1200GS Adventure. 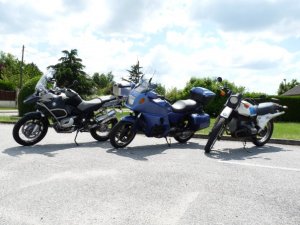 So we got the bike for our first motorcycle trip together!